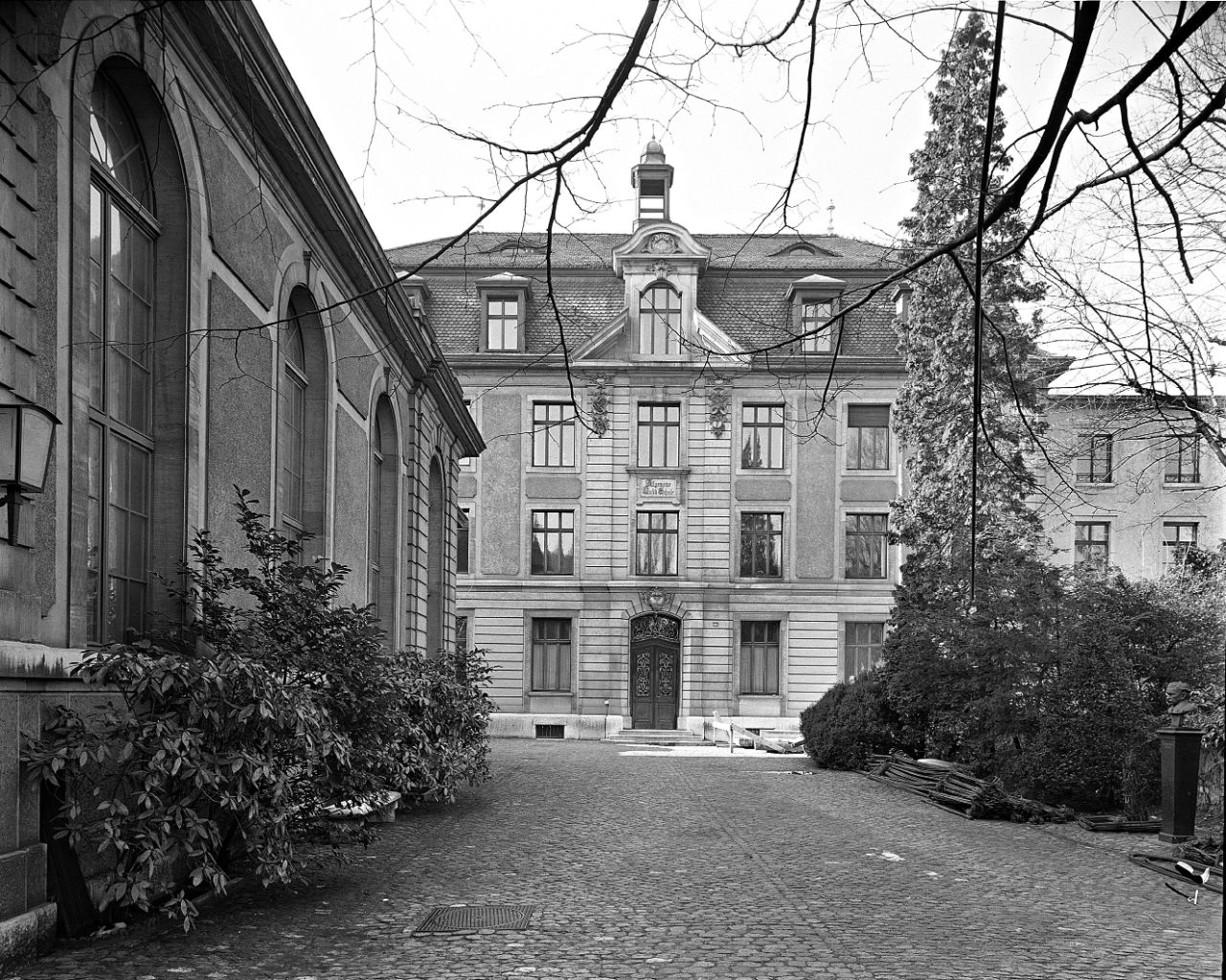 The history of the library is inextricably linked with the rapid growth of the Academy of Music. For proof, one needs look no further than the various names that the school has gone by, as evidenced by the stamps on the library’s music scores and books: from Allgemeine Musikschule Basel to Musikschule & Conservatorium, right up to the Hans Huber Bibliothek.

Founded in 1867, the Allgemeine Musikschule owes its existence to the Basel teacher and philanthropist Johann Jakob Schäublin (1822-1901), and Basler Gesellschaft für das Gute und Gemeinnützige (GGG), a charitable institution. Its initial premises were on the second floor of Herbergsgasse 1, and comprised a large hall, three classrooms, a library room and a meeting room. Before long the school had outgrown its quarters, so in 1873 it moved to more spacious premises at Nadelberg 8. By the 1880s, it found itself in the same situation again due to its ever-rising intake (over 500 pupils at that time). Indeed, space was at such a premium by the turn of the century that the principal’s office and meeting room also served as the library, the secretary’s office, the piano room, and seminar room (Hans Oesch: Die Musik-Akademie Basel, Festschrift zum hundertjährigen Bestehen der Musikschule Basel 1867-1967, Basel 1967).

In October 1903, the school, then under principal Hans Huber, moved to new and more spacious premises in the Leonhardstrasse. According to the minutes concerning the relocation project, “The last ever lesson in the old building was given on 3 October 1903; that very afternoon, work began on moving the library.” The new building had everything a school might need: separate offices for the principal and the secretary, a library room and a spacious multipurpose room, two staff rooms and a waiting room for the pupils, 25 classrooms, as well as a large concert hall and rehearsal room. Thanks to its generous premises, the Allgemeine Musikschule  was able to expand and open a music conservatory, or, as Hans Huber referred to it, “The Bel-Etage on the ground floor of our noble music school.” (Hans Huber).

After the Second World War, the building was completely renovated; in 1946 the library was moved to the front building. When talk began in 1952/53 of a possible merger with the Schola Cantorum Basiliensis, space became an issue again. Given that the library holdings had grown considerably in the intervening years, the idea was floated of constructing a purpose-built library in an unused part of the grounds behind the main house. Under the first director of the newly named Musik-Akademie, the new library opened in January 1955. Then in 1986, the academy, now led by Rudolf Kelterborn, expanded to include Leonhardsstrasse 10 (the “Böhm” building), adding a reading room and more open stacks to its existing facilities.

Funded by the private Vera Oeri Foundation, the brand-new, stand-alone library building opened its doors in autumn 2009. Holdings that were once confined to attics, cellars and hall cabinets could finally move to a more fitting home. In addition, the public area provides a comfortable, quiet and conducive space for study and reflection.
Martina Wohlthat